athlete of the month: will flynt 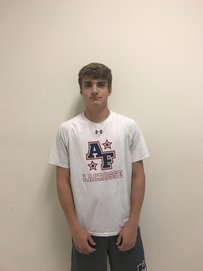 Will Flynt, a well known student athlete and captain on the popular Men’s Lacrosse team, holds the title of May Athlete of the Month. Coach Sliwa nominates him because “regardless of who we’re playing, he seems to step up his game and play as hard as he can.” Coach Sliwa also explains that Flynt can play
​multiple positions, “which presents matchup problems for opposing teams”. Flynt also always tries his hardest at practice, according to Coach Sliwa.
Flynt started lacrosse in the 7th grade. He became interested in lacrosse because his little brother played lacrosse and Flynt played soccer, and since lacrosse requires more contact, his little brother called him a wimp. Because of this, Flynt wanted to show his little brother that he could play the same sport as him, and ever since he has continued to play.
Flynt says that before every game, he and the team always listen to music in the locker room to get hype. One of Flynt’s favorite parts about lacrosse includes “being able to hit people”. According to Flynt, getting everyone to do the correct maneuver when “clearing the ball” proves to be challenging since it requires a total team effort.
Flynt played soccer for AFHS last year and he says he will continue with his soccer career as well as lacrosse. He has been playing soccer his whole life, but he says he likes lacrosse better than soccer.

Discover the league of the Unknown

By: Sierra Sanchez
AFHS has heard the buzz about the football team and they know the run-down on basketball players, but what about the fellow student athletes that go unnoticed? Patriot students do not just take pride in school sanctioned sports, but outside teams that go unknown as well. Beach Volleyball has grown popular among students at Apex Friendship.
Since last year, Apex Friendship has had a Beach Volleyball team that welcomes anyone that shows interest and passion in the sport. Daniel Wellish, a co-president of the AFHS Beach Volleyball team, helped found the club back in 2015 with a friend. Wellish said, “My Co-President, Brenna Matthews, and I are neighbors; she approached me and asked if I were interested in the sport and after that we took it upon ourselves to start the club.” Apex Friendship plays under the NC High School Sand Volleyball Association (NCHSSVA) that forms leagues that play against 46 schools according to afhssandvolleyball.weebly.com.
Recently, AFHS Sand Club won the finals against Cardinal Gibbons with a score of 21-3 on April 9th, giving them their first conference win. The team has come a long way since the start and plans to keep improving. Wellish said, “My partner, Luke Hepburn and I, placed second in our first tournament and now won our conference, so we definitely have something special here.”
The team does not just strive in sports, but with each other as well. Wellish said that since starting the club, he has created more friendships with his peers because of the hard work and fun they have on the sand.
Although for now the season has ended, don’t be sad for too long, since the season will start up again this upcoming school year. If interested, talk to Coach Sullivan in room 3237 on Mondays during B lunch or Thursdays during A lunch. 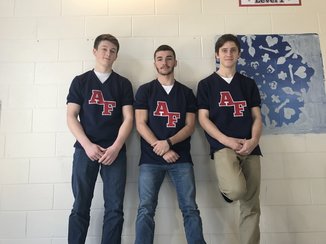 When the word “cheerleader” rolls off a person’s tongue, the general thought leaps to pretty girls with high ponytails. Generally, people tend to forget about the guys involved in this sport. The hard-working male cheerleaders that lift up AFHS’ spirit and fellow teammates deserve to shine in the spotlight as well.
Cheerleading has been given the role of a “feminine” sport because of the lack of male domination. Football and cheerleading usually only intertwine for entertainment and purposes of school spirit, but AFHS has wrapped the two in one.  AFHS Patriot cheer-team includes football players. These athletes dominate the field in the fall and the mat in the winter. Will Kilpatrick, Defensive Back and new cheerleader, addressed the contrast between the two sports, “I wanted to open myself to a new setting and new experience. I think only being involved in such a rough sport made cheerleading more appealing to me, because I wanted to know how hard it would be for me to transition into the opposite spectrum.”
AFHS Cheerleaders Nathan Wellish (11) and Drew Williams (10) mentioned that the football players have contributed more than just school spirit. Wellish says, “The guys that joined from the football team brought more potential for stunts. Since the number of guys on the team has increased we’ve all become a lot closer and tight knit. We’re pretty outnumbered by all the girls, but we’ve all bonded together.”
The foundation of every sport becomes teamwork, being able to successfully communicate with other teammate’s forms a trust with one another. After joining the team, Kilpatrick realized that football and cheerleading shared more similarities than what meets the eye, the biggest being team effort. The impact of an injury of a fellow athlete can drastically affect the team.
This interest in cheerleading has not been a phase for Kilpatrick. When asked about his future athletic plans, he said, “I think I’ll be involved next year. I’ve had a really great time doing it. I like competing and cheering with my team. I hadn’t previously gone to any sporting events besides football, so now I have a lot more school spirit and feel more involved in the sports programs.”
The common worry high schoolers may face when struggling whether or not to join the cheer-team would be the reaction from their peers. Kilpatrick advised his classmates to take the risk despite the possible social repercussions. He said, “I say you just got to go for it. I had the same concerns since it’s not a male dominated sport. Being vulnerable and open makes you a more rounded person, I’ve developed a more rounded sports career in high school.”
According to cheerleading.isport.com, “There are many scholarship opportunities for male cheerleaders who want to pursue the sport in college. Because male cheerleaders are still a small group, it is much easier to get financial help than you might think.” An added benefit for males who wish to participate in cheerleading in college lies in the statistics, according to cheerleading.isport.com, “50% of college cheerleaders are male.”
Soar into a new sport this year and take the risk. Show some Patriot pride and talk to Ms.Sichak in room 3105 for more information